Life. What a box of chocolates. And to continue to quote Forest Gump, shit happens. Literally. It feels almost like another lifetime ago that I was leaving Melbourne and setting off for Italy. In just over 12 days –

Before I go into a road race report, and express how overwhelmed I am by everybody’s congratulations and support, I would like to firstly dedicate my world cup win to ‘Disco’ Derek Josephs. Disco was a beloved member of my home club – The Pirates Sporting Club (off which I am aptly named Peggy). It was with great sadness, and complete shock, that Disco passed away on 4th May 2017. Disco passed away doing with he loved, and will be sorely missed by so many, including his wife Christine. Disco was an unassuming Pirate, the quiet achiever and steadfast friend. Always the first to stop and help those in need, always the first to put up his hand to help. Always there in rain, hail, or shine. Always the supportive Pirate charaterised by a crazy mop of hair (hence ‘Disco’). Disco, words cannot express our devastation, hurt, and pain. However, we know that you would not want us to stop cycling, running, or having adventures. We know you would want us to keep the sound of ‘Arrrrgggghhh’ alive and well down Beach Road. May you continue your adventures, whatever they may be, and may this small piece of gold bullion be a tribute to all that you represented, stood for, and bought to our lives. 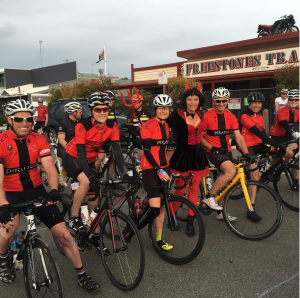 A Crappy Ode
A stormy sea was rumbling inside,
And bugger me I couldn’t hold back the tide!
The next 96hours felt like forever –
On my worst foe I would wish this never.
My best friend became the chamber throne,
And I was whittled down to skin and bone.
I became a pro at sleeping on the holy bowl,
And I think I used all of Italys toilet rolls..
Cramps worse than the monthly for a female,
I made sure I stayed away from fibre and kale…
My belief that gastro lasted 48 hours max,
Has now been completely shattered and cracked.
How I miss the delicious feeling and joy of hunger,
This non-eating thing is not making me any younger.
May this tale of woe bring a laugh or a smile
And may you never undergo this joyous, happy trial!

With a good 48hrs of food in my legs, I felt a little bit more confident heading into the road race than I did the time trial two days before. It was delicious to finally feel hungry again and feel like a human being. With discussion strategies between my fellow C4 teammate, Meg Lemon, Sport Scientist Nick Owen, and 2IC Cam, we devised various scenarios and plans for the race. The weather gods smiled upon us, and we were graced with sunshine and mild winds. The road race was 10 laps around a 7.1km flat circuit, with the start/finish over a technical cobbled section. Vibration training anyone?

Naturally at the start of the race the nerves kick in – mine come in the form of needing to go the bathroom multiple times. However, when you are on the start line with 15 other women in various Para Cycling categories, you have your race-face on and use those pelvic floor muscles like there is no tomorrow. After 500m of neutral, the expected surge did not come. I settled in for a cat and mouse approach by the C5 women. As an aside – we had C3, C4, and C5 classifications in the race with C3’s doing a shorter distance. However, all classes are allowed to race together and then are separated out for presentations.

Everyone was very jumpy and the bike skills left a lot to be desired, I think it was probably one of the hairiest bike races I have ever done. A lot of crossing of wheels, lines not being held through corners, and all etiquette out the window. Add in that English is only spoken by the minority of riders and you have one dicey race. Personally part of my goal was to simply stay upright. It became the pattern that the C5’s would put down the pressure over the cobbled section and try to wear the field down by putting in a decent gap. Hence positioning heading into the last corner became critical, and the further back in the peloton you were meant the more power you had to put down to bridge any gaps that opened up. I quickly learnt which wheels to follow and what side of the road to be on.

There was confusion within the peloton when we got a bell after only lap 7 (for the C3 athletes) and so the next lap saw a flurry of attacks and harsh words to clarify C4/C5’s still had another three laps to go. A brief respite before everyone was on edge again during the final lap. Coming into the final km’s, I knew it was all going to come down to positioning. I needed to be the first C4 around the final corner if I had any chance of winning. So I worked my way up and faced the wind, knowing that burning more energy now was going to be worth it. I slotted in three wheels back (one of the best places to be in a race), and stuck to the wheel in front like glue. All niceties were put aside. The pace ramped up during the last 1.5km as the peloton gained speed. Knowing that the section before the final corner was going to be the hardest, I ignored the cramps, the protests from the screaming legs, and became singularly focused on the wheel in front.

Getting around the final corner I was in the best possible position and gunned it down the cobles behind the C5 winners. Crossing the line I had an inkling I was on the podium, but I didn’t want to count any chickens before they hatched. Pulling off the circuit and finding doping control surrounding you is a pretty good sign you are on the podium and I started to count a few chickens. Realisation that I had won my first world cup did not sink in until I was standing on the podium listening to the national anthem playing. I celebrated with five bottles of water, some nuts, and sardines in doping control for the next two hours 😉

Yes standing on top of the podium is pretty special. Yes there has been a shit load of work behind that one moment. Yes there has been blood, sweat and tears. However, what has been the most special has been reading people’s congratulations and realising/appreciating/extreme gratefulness for the community I am a part of. People are what make the journey, the memories, and the experiences. Thank you for the bottom of my heart.

Thank you to the Aussie team I am a part of, my Paralympic MOB, my family, my friends, my partner, the VIS, THB, my supporters/sponsors. Grazi Mille.

And yes, I have stopped to smell the roses today before we restocked for the next world cup in Ostend. A blog post on this World Cup will follow shortly. 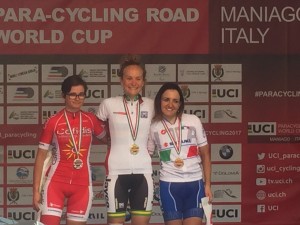 Ride with a purpose, ride with a smile, ride in the moment,
Han x