I have recently started doing a few rides with a group known as ‘The Pirates’, who have both a cycling and rowing component to their club. A tradition, or perhaps ‘according to the code’, is the write up of a ride report post these sessions. I took my first stab after our thursday ride this week (thanks LD for the edits and ‘ps’ additions!). Enjoy*!

With hail, rain and shiver-me-timbers on the forecast for late morning, a number of Pirates and Wenches decided, a priori, to take the risk and HTFU. Come 4:58am, the emails aligned with rain on the radar and a general ‘out’ consensus was heard. However, not to be deterred, the Wenches were out in/with Force for Greg’s Pirate Ride debut. Nearly outweighing the pirates, face was saved by the late arrival of Honeymoon to make the numbers even.

An odd mix developed on the way down to Mordi, and X outweighed Y with the addition of the talkative women’s St Kilda bunch who held on strongly all the way back.

After a quick turn off at Reserve Road for the wenches (and shout out to Stationmaster who was conspicuous by absence), and a good session of rolling turns in little pellets of rain that not only splattered across the front of the glasses but also under, arrival at Port was imminent. Quickly joined by four sodden Pirates, caffeine was gulped, bullion was exchanged, and naturally the sun arrived….

p.s – the Wenches were thinking of buying the below t-shirt for a nameless Pirate, but after his lack of presence, we’ve decided it may not be appropriate (and also informed by fellow scum, that this suggestion may in fact be too exciting for you). 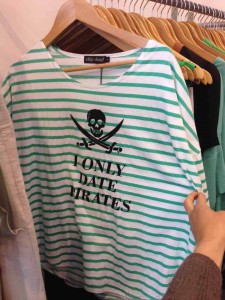 Ride safe, ride with a smile, ride in the moment,

*Disclaimer: No liability is held for the lack of PC in this post, or any future post, relating to the Pirate Cycling Club.